For those of you not familiar with the type, the Nikonos was the Nikon 35 mm underwater camera. This one is a model ‘V’ from the period 1984 – 2001. These were intended for specialist use by divers and as a result were very expensive at the time. As a result of the mass flight from film, these cameras are now ridiculously cheap.

What is it like to use? I borrowed one from Gold Coast enthusiast John Clark to find out. This particular camera – with a 35 mm f2.5 lens – is in good condition with all the seals intact. This is important, as the camera cannot be used underwater unless the seals are in good condition. This camera also looks clean when I open it up to put in a roll of ISO 400 film.

I also put in new batteries (to power the shutter and LED viewfinder display), which go in a separate o-ring sealed compartment. Inside, there is a pressure plate which one lifts up to load the film. Otherwise, it loads like any other manual film camera. It is with mentioning here that to rewind the film the shutter speed dial has to be placed in the ‘R’ position seen in the photo below. This will not be a familiar feature for F3 users.

Anyway, I loaded some film and took 36 shots around the local area. We shall see how I managed. Focus is achieved by estimating distance – it uses a scale focus system. Distance is set by the silver knob on the lens. Aperture (controlled by the black knob on the lens) and shutter speed are easier to get right as there is exposure metering. So, perhaps my shots will be correctly exposed, but out of focus. We shall see.

Well the good news is I managed to estimate distance reasonably well. Here’s a few photos from Sydney’s Inner West.

Generally I was pretty happy. Remember, this is a lens with no focus ring (or autofocus), on a camera designed to be used underwater. 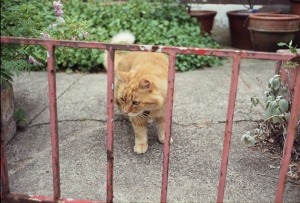 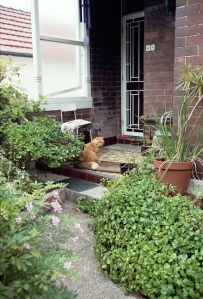 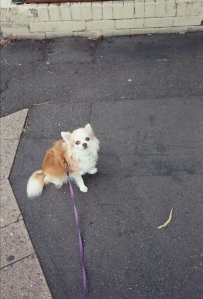 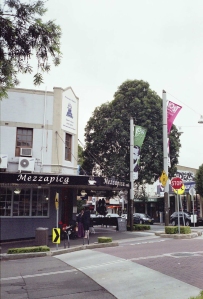 I have used this product extensively – mainly with a Nikon F3 or Nikon F100 – in bright daylight and also in poor lighting. The quality of print is consistently good. Sharp, great contrast and definition. It scans beautifully too. The ease of processing is another plus that makes this a good film to have in my bag.

After using the Think Tank SubUrban 20 (above) alongside my Retrospective 7 for a few months I have made a few comparisons and have a few ideas for what could be added to later versions.

The appearance of the SubUrban is high quality. It looks too small to be a camera bag, nor is it a camera shape, so it is a good disguise.

I am a freelance writer and l like to take photographs to accompany my stories. Typically I travel with a Canon 60D and a range of lenses. This might be a Tamron 28-75 f2.8, Sigma 50 f1.4 and a Canon 10-22 wide angle lens. I usually also need a flash in the bag. In the pictures below the 10-22 lens is fitted to the camera, and the 28-75 plus flash are in the centre of the bag. A lens hood is at the end, and you can also see a moisture absorbing pack sitting there.

Spare camera and flash batteries or other small items will fit in the bag easily, but fitting the 50mm lens in there is a tight squeeze with the flash in there.

The SubUrban has a stiffer outer shell than the Retrospective, as a result of the material used.  The ‘open away’ flap is good, but it misses out on the Retro’s feature of a choice between Velcro fastening or silent opening. The flap must be unzipped each time. Perhaps it could have a Velcro tab for quick closure.

The top mesh pouch seen at left could use some elastic material bordering the pockets, or some inner dividers. The outer zip pocket, which forms part of the outer flap, is well divided and has useful little pockets.

The Retro has a lot of features to like. The Velcro closure (or silent opening option) on the Retro is a feature I am consistently impressed by.

The only disadvantage of the Retro’s top flap is that there is no additional secure closure option available (such as a buckle). That said, the Velcro is secure and I’ve never had the bag flap open by accident.

As an overall comparison, each of the bags is ‘better’ in one or other unique ways.

The SubUrban has slightly less capacity than the Retro, partly due to the more rigid construction used. The ‘Subbie’ has a more contemporary look due to the black nylon fabric, and perhaps it might offer slightly better protection than the soft Retro.

There is a surprising amount of room in the Subbie and it’s a neat, efficient bag if one is shooting a 60D or similar size. I have had my EOS 3 in the bag as well but it is a less comfortable fit. The older generation film camera is just a bit larger.

The Retro is a slightly bigger bag, with lots of great little pockets and dividers. It is an easy bag to get things out of. It offers a pretty good ‘disguise’ of your camera equipment, probably just as good as the ‘Subbie’ does. It also has a iPad size pocket which offers useful extra storage, or indeed a place to put your iPad…

I recommend both bags for a 60D size camera with a small load of equipment. The Retro has the edge for space, as it is a slightly bigger and softer bag. The Subbie has the edge in contemporary looks, and the secure top flap (if you feel that’s a necessity). It also has some nice storage in the outer pockets and may be a little more protective overall. 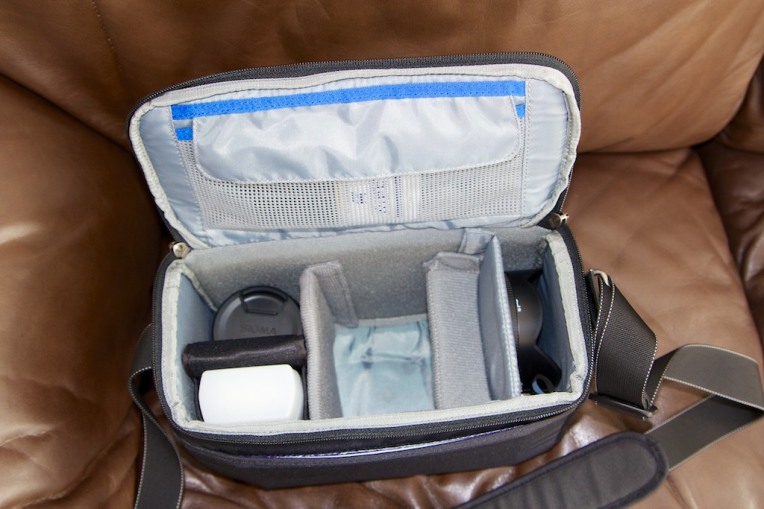 Configuration of the bag for working at the Royal Easter Show. On this occasion I had a 28-70 2.8 lens mounted on an EOS 60D. Also in the bag, a flash unit and a Sigma 50 mm f1.4 lens plus spare battery, memory cards and note book. Water bottle was pushed into an elastic pocket on the side of the bag.

Was this a gift?: No

I am a journalist who at times takes my own photographs to accompany stories. So on occasions I have my camera out all day. The Sun Sniper strap carries the Canon EOS camera well. It is a lot more comfortable than a neck strap as the shoulder (in my case the left) supports the weight of the camera.

The only real fault is the strap pad moves off the shoulder when the camera is brought up to shoot so I often have to re-position the pad on my shoulder. This is not a big hassle but it is something to be aware of. With the camera in position down on the hip the pad stays in position and is very comfortable.

I recommend checking the screw attachment to the camera base before each use. The manufacturer also recommends this.

Look out for a review of the Think Tank SubUrban 20, which is shown below. I’ll also be covering the Canowindra Balloon Challenge and the Royal Easter Show. For more information see http://www.canowindrachallenge.org.au and http://www.eastershow.com.au