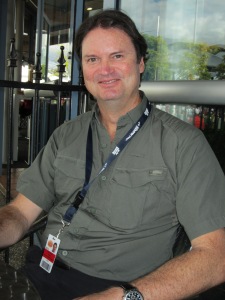 I had an epiphany yesterday while looking at compact and mirrorless cameras of various types. In short, I started to think that I was being (potentially) ripped off by marketing. I looked at some of the really hot ‘point and shoots’ (some of which have been christened ‘the best digital camera in the world’) and just could not see the value. Small sensors (in varying sizes), small lenses, impossible viewfinders, difficult to reach controls. In some cases, the cameras themselves were not that small.

When I looked at all this, even the cheapest DSLR from Canon or Nikon started to look like a good buy.

I’ll admit that a few things were working against the compact cameras yesterday. In the first place I looked in, the cameras were all lined up in a narrow high corridor of shelving. They were able to be handled (more on this later) as they had those tether things on them. I did not get much of a look as, first of all, someone had broken wind in that narrow space and it was as though there was something dead (such as a buffalo) stuck in the space. I did not feel like staying, after that.

The next place I looked had no dead buffalo in the corridor of cameras, nor did it have more than 25% of the cameras that were actually charged. Imagine the excitement as I switch on a $1500 compact camera, best in the world, to see…nothing. How about having a battery in them and charging it every now and again? A decent battery should be able to handle being turned on in the store every now and again. Even the cameras that worked did not seem to offer much that I had not seen before on a $100 point and shoot. What was all the fuss about?

Some of the highly rated compacts were about the size of a DSLR, anyway. About the only special thing about these cameras with fixed, tiny lenses seemed to be that they are ‘more discreet’ (than a DSLR). Due to the size of some of them I am not so sure. In any case, I often feel that I need a more obvious camera to get people to look at it. Otherwise I get the group shot with one dude looking off to the left or right somewhere at something only he thinks is important.

A discreet camera is meant to be helpful for street photography. This may be true, but most punters seem to notice any camera that one holds. A compact can be held at waist level (look into the fold out screen), though I can do that with some DSLR too. People will usually see the camera held at the waist or at eye level. If they don’t see the camera, they must think you are holding your hands over your face or crotch. Might as well let them see the camera.

Most of my own ‘street’ photography bores me senseless anyway. Usually to make it interesting you need someone who looks like an extra from ‘The Name of the Rose’ (watch this film to see what I mean) or the guy with a bundle of sticks on his back on the cover of Led Zeppelin IV. Little else is worth the bother.

Normally I like nothing better than a shiny camera but these left me cold. Even if I had a spare $10K I felt no inclination to spend $1,000 on any of these.

I’m sure I have missed the point somewhere but, hey, it’s my money.

See me on a banking poster here….

For those of you who could not see the link, here is a photo taken by one of my friends: 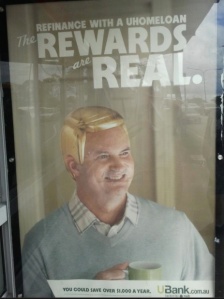 I had a look around the city today and saw a few – actually many – of these advertisements. Here is one that I photographed: 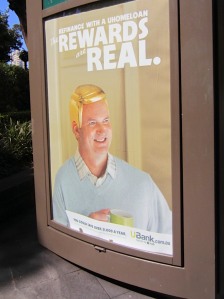